The Four Season in Tuscany

Why not allow yourself a relaxing winter holiday, taking advantage of the numerous seasonal offers in the variety of Spas that surround us, Terme di Gambassi (Gambassi Spa) is situated only 10 km away with its relaxing spa and water: Acqua di Pillo, containing bicarbonate, sulphates and magnesium it flows at a natural temprature of 14.6 °C, with rare characteristics likened to Aqua Vichy.
Terme di Rapolano is a paradise of relaxation with its natural flowing spa waters, which remain constant at a temperature of 39°C.
In November there are also numerous opportunities to go "Olive oil tasting" in the various oil mills which produce the best olive oil in the world.
Christmas is without doubt the most popular holiday of the year in Italy. Shops fill with lights, streets are decorated and in churches and squares we find nativities. Many towns hold Christmas markets.
Ephifany is celebrated on the 6th of January and in many Tuscan towns markets and special events are organised for adults and children.
In March Certaldo holds a Truffle food festival (Sagra del Tartufo Marzuolo), many traditional Tuscan dishes are created based on the main ingredient, the truffle.

In Spring Tuscany is full of unique events. Not to miss is the historical Florentine football which is a mix of football and rugby played in the traditional costume of the 1500"s. The four teams represent the four historical neighbourhoods of the city of Florence.
Another important occasion takes place at Easter the "Scoppia del caro", a tradition which began over 300 years ago, an elaborate carriage three stories high and dating from 1622 is pulled around the city by two white oxen wearing gharlands, finally arriving at the Duomo. (Cathedral).
From the end of April to the end of June there is the "Maggio Musicale Fiorentino", a variety of highly acclaimed international artists perform classical music concerts, opera and ballet along with other events, organised in various theatres and locations around the city.
In spring in Certaldo the "Sagra del tartufo Marzuolo" (truffle food festival) takes place. There are also delightful arts and crafts and antique markets.
On the last Sunday in May a day is dedicated to wine. "Cantine aperti" when wine producers open there wine sellars to the public.
In Montespertoli in May the "Mostra del Chianti" is an event dedicated to wine and its tradition and place in the Tuscan territory.

Time to discover the beautiful landscapes and views that Chianti has to offer, cypress trees and rolling hills that are represented in the many paintings of Macchiaioli, perhaps with a good glass of wine in your hand. Tuscany is ready to welcome you. The countryside offers many different interesting excursions and inviting places to stay in all its summer splendour.
Other than places to visit many other exciting events take place at this time.
In the month of June in San Gimigniano we can experience the "Ferie delle Messi" a historical re-enactment of a competition with horses called "Giostra dei Bastoni".
In Arezzo the traditional "Giostra del Saraceno" of ancient origins is organised in Piazza Grande, the main square. This competion held twice a year , the third Saturday in June at night and the first Sunday in September in the afternoon.
The Palio of Siena is a highlight of summer not to be missed. A historical and passionate horse race that takes place around the famous main square "Piazza del Campo" in Siena. It happens twice a year, the 2nd of July and the 16th of August . The neighbourhoods of the city (contrade) race to win "il Drappellone" or the Palio dedicated to the Virgin Mary.
In July at " Monteriggione di torri si corona", in the small towered castle we can re-live medieval times.
In Vinci the birth place of Leonardo on the last Sunday of July there is "Volo di Cecco Santi" a festival with a historical procession, competitions, games, arts and craft exhibitions and tastings of local food.
Volterra A.D. 1398 –on the 3rd and 4th Sunday in August the city is animated by fiery warhorses, fearless knights, noblemen, ladies, artisans and merchants, common people and peasants, flagwavers and crossbowmen, musicians and jesters....as if by magic they will bring back the mysterious and magic Middle Ages to Volterra.
"Il Bravio delle Botti" takes place the last Sunday in August in Montepulciano an enjoyable and amusing race with wine barrels throught the narrow streets of the town.
L"Accademia dei Leggieri a very old theatre association founded in the XVI century organises classical music concerts and opera during the summer in San Giminignano.
Other than these notable dates Tuscany is rich in local food festivals and other interesting and exciting celebrations.

Tuscany in Autumn is beautiful, rolling hills, golden vines and enchanting valleys enclosing secret places yet to be discovered.
The tempertures in Autumn are perfect for sport. For bicycle lovers or those who enjoy horse-riding and walking. A way to get to know Tuscany without the crowds.
The first Sunday in September in Piazza Grande, Arezzo we can experience "Giostra del Saracino" an event dating from the middle ages.
Pienza hosts the Pecorino cheese festival the first Sunday in September, the capital of pecorino cheese becomes a hub of colour and aromas.
September is also the time of the grape harvest, this is a time to discover Chianti and its many world famous wine producers.
October is time for the "Boccaccesca" a thriving celebration of local food in the narrow streets of Certaldo with food stands, tastings and even cooking lessons.
On the last Sunday of October in Montalcino the "Sagra del Torda" re-enacts a competition to celebrate the end of the hunting season.
The Autumn festival in Monteriggioni on the first Saturday and Sunday in October celebrates the grape harvest. 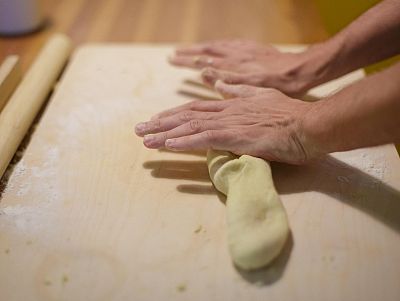 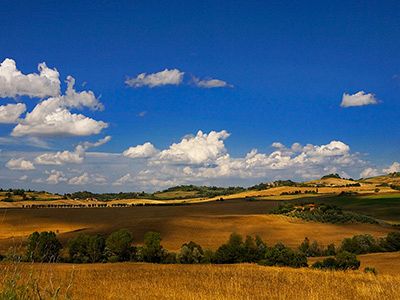